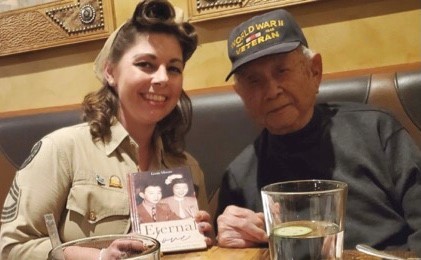 As High Desert Medical Group has worked vigorously to help our neighbors in the Antelope Valley and greater Los Angeles County turn the page on the scourge of the Covid-19 pandemic, the group and its providers and staff have worked just as vigorously to assist veterans in our communities of care.

In a more normal year, HDMG’s Senior Wellness Center would have been working to prepare a special meal and celebration for our veterans for Memorial Day. All will recall that 2020, and even the still unfolding 2021 have been different.

At our most recent Memorial Day Luncheon (yes, it was 2019), retired Master Sgt. Mahoney, a Green Beret and veteran of wars in Vietnam and Iraq, was the honored guest and keynote speaker.

“I honestly cannot remember how many countries I have been shot at while serving in the armed forces,” said Mahoney, who began his military journey at 19 as a Navy Seabee in Vietnam and earned his Army jump wings around the age of 40 in order to deploy with Special Forces, the Green Berets.

In Iraq, Mahoney was wounded and awarded the Purple Heart while serving as First Sergeant of an Airborne Civil Affairs Reserve unit. He deployed to Iraq with his son, in the same unit.

HDMG Physician’s Assistant, Peter Rodriguez, brought Mahoney to the attention of HDMG’s veterans assistance team, myself and Army veteran James Milton, a Licensed Clinical Social Worker – who served in Vietnam as a paratrooper with the 82nd Airborne “All American” Division.

Mahoney received a standing ovation from our audience of a packed room of HDMG members, many of them veterans, and their spouses. HDMG military veterans also attended, including Dr. Don Parazo, HDMG Associate Medical Director, and retired Navy physician, along with LCSW Milton, and 101st Airborne veteran Nathan Burnett, who keeps HDMG maintenance and facilities trim and running.

Because of the pandemic the in-person celebrations, recognitions and ceremonies had to be put on hold, but HDMG did not flag in its resolve to be of assistance to our veterans of armed services whenever possible, even during the mean season of Covid-19.

“It has always been one of our key commitments to ensure that we are not only honoring our veterans, but also serving them in both their health and social needs,” HDMG Administrator Rafael Gonzalez said.

Two special veterans who received the help and case assistance of HDMG during the pandemic were Willard LaTour, 78, a Marine combat veteran of the Vietnam War, and 98-year-old Louis Moore, a Chinese-American veteran of World War II.

In the case of Mr. Moore, it was a matter of ensuring that at 98 years, and residing in assisted living, he was able to achieve early access to the vaccine program administered by HDMG at the group’s Senior Wellness Center.

Mr. Moore, who has limited mobility, was administered first and second shots of the Moderna vaccine from his caregiver’s car in the parking lot at High Desert Medical Group.

The unanticipated reward of having ensured that Mr. Moore was safe against Covid-19 was that it enabled him to promote the book he had only recently completed, a memoir titled “Eternal Love.” The book, which has been trending in hot sales on Amazon books, recounted his 74-year marriage and romance with his beloved wife, Nellie, who had recently died in nursing care amid the separations of the pandemic.

The book, a compilation of their life together, eventually inspired a socially distanced book-signing event at a local American Legion post. The event was organized by Donna Carrion, HDMG’s Caring for Life Coordinator, and her veterans service nonprofit – Bombshell Betty’s Calendar for Charity. “Eternal Love” chronicled Mr. Moore’s service in World War II, and his meeting Nellie shortly after. He was a Chinese-American G.I. who faced prejudice in the ranks, and served honorably in the European Theater of Operations.

At the end of World War II, he met Nellie Hatsumi Mayeda, at a Manhattan night club, “The China Doll.” She worked as a chorus dancer and had only recently been released from internment at the Gila Bend Relocation Center because of her Japanese ancestry. The captivity of Japanese-Americans imprisoned because of loyalty suspicions during World War II has been acknowledged by the U.S. government as a historic mistake and abuse of the Constitution.

The book, and Mr. Moore’s wartime service have been reported about in the Los Angeles Times, and on ABC’s World News Tonight with David Muir, in the “America Strong” segment of June 1, 2021. None of which would have been possible without HDMG’s early intervention, recognizing Mr. Moore’s advanced age and service during World War II.

“I will be eternally grateful for everything everyone has done for me,” Moore said, recently. “Your medical group helped when no one else had called me, or had let me know how I could get vaccinated. I want to thank all your people who helped me with this.”

He added that the vaccination “helped me in my efforts to tell the world about my beloved Nellie, who was an angel and is now in heaven, where I hope to be with her one day. I a m 98 years old, and time is of the essence.”

In the case of HDMG member LaTour – whose account is shared with his written permission – it was a case of HDMG assisting him in two years long struggle with the Department of Veterans Affairs to secure the service-connected benefits he was entitled as a combatant traumatized during the Vietnam War.

Susan Cole, a seasoned Patient Services Associate, in Member Services, remembered LaTour coming in for tests and examinations, and that he seemed to have a “lost look” about him. Cole directed him to meet with the veteran’s assistance advocate at HDMG. This veterans health advocacy work done by a USC-trained military social work specialist is a key component of the work that Administrator Rafael Gonzalez envisioned.

Mr. LaTour had previously been denied VA benefits more than 15 years previous, and he did not know how to file an appeal or seek further redress. Mr. LaTour served in Vietnam as a Marine in 1968 and 1969, the years of the so-called Tet Offensive, some of the war’s heaviest fighting.

Through a series of referrals and diagnoses by clinicians at HDMG, but also approved under the VA’s Mission Act – in which HDMG is an authorized health service provider – Mr. LaTour’s case was ultimately approved for review.

The HDMG clinician in veteran’s advocacy accompanied Mr. LaTour to the examination, which was held in Bakersfield on Dec. 23, 2020. The trip was achieved with both clinician and Mr. LaTour masked, with veteran LaTour sitting rear-seat in a rental car, with both windows open during the drive over the Tehachapi Pass on the 152-mile round trip to the Bakersfield exam.

After the exam, the VA approved Mr. LaTour for benefits at the 50% level for the trauma he experienced in the Vietnam War. His clinicians, HDMG and Mission Act, believed that was not enough. Further appeals correspondence followed.

Within 6 weeks after the initial rating of 50%, it was modified to 100% by the VA’s Veterans Benefits Administration.

“I was approved for 100%, and I will always be grateful to High Desert, and the way you folks helped me,” the 78-year-old Marine veteran said.

“I would not have known where to go, or how to do this,” he said. “I did not know what to do or where to go until Sue Cole sent me your way.”

Through the years, HDMG has taken an ongoing and affirmative role in supporting veterans in its care as patients, or in the larger community. For years, at the organization’s premier annual event, the HDMG Senior Expo, the group has joined Los Angeles County Supervisor Kathryn Barger in bestowing the Veterans Group Community Service Award. The award has gone to a parade of regional veterans service non-profits with proven track records of support for veterans, in housing, education, transition from the military and mental health services.

Currently, the group has a sustaining partnership with Homes4Families, a developer of “veterans-enriched communities,” building affordable housing for vets who participate in the Habitat for Humanity-style initiative. Dozens of HDMG staffers have volunteered hundreds of hours of assistance to building this 52-home project in the HDMG-served community of Palmdale.

The commitment continues. The work goes on. In years of the challenge of Covid-19, HDMG has sustained its commitment to serving those who served all of us.